Werner Freund (2nd March 1933 – 9th February 2014) was a man of intense passion and commitment. Yes, people like that do exist but he was exceptional.

Imagine living with wolves and studying them for years in order to understand their behavior. With time you start behaving like them so as to be accepted in to their packs.

That is actually what Werner Freund did.

But first, before we dive into his life with wolves, let’s get to know who this extraordinary man actually was.

Werner Freund was born on March 2, 1933 in Garbenteich. During the early part of his career, he worked as a gardener, expedition leader, and later a predator keeper from the year 1955. All these positions he held under the employment of the Federal border police before he moved to Bundeswehr in 1957.

His last station was in Merzig where he held the rank of a staff sergeant in the Barracks. While there, he worked as an instructor. He taught as a precursor of the individual fighter training courses.

Werner got married to his wife, Erika, in 1962 and they both lived in Merzig from 1972. Werner and his wife Erika remained married for more than fifty years.

“People said, I am half human.” Werner Freund 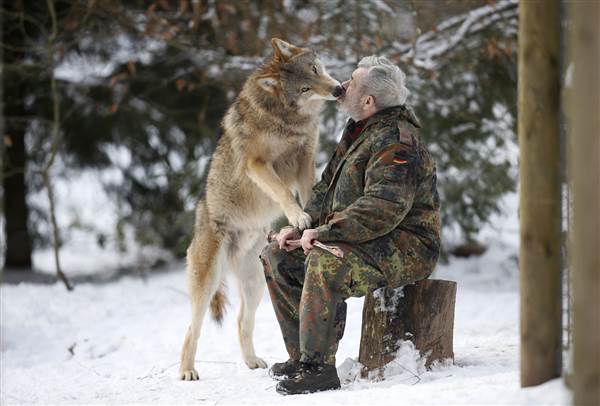 The Mongolian wolf, Heiko, licks the mouth of Werner Freund in a sign of acknowledgement. (Photo: Lisi Niesner/Reuters)

Werner Freund dedicated his whole life to observing wolves and in turn adopting their behaviors so that these creatures would accept him in their packs. Adopting the wolves behaviors involved activities such as letting the wolves lick his face, biting into animal carcasses, and howling.

The very first wolf that Werner adopted was in 1972. This he did together with his wife while he worked as a gardener and zoo keeper. This first wolf originated from Yugoslavia. This wolf mated with a female and this gave rise to a set of cubs.

Years later, Werner founded and ran a wolf sanctuary named Werner Freund Wolfspark. This sanctuary is located in the small town of Merzig in Germany.

By the Freund by the time of his death had managed to win the trust of 30 wolves. This he did by making sure that he had keenly observed the wolves’ behavior and then mastered it. In fact, the wolves respected him enough to make him the “human alpha” of the pack. Certainly not a mean feat at all.

When he was around them, each and every one of these wolves was meek and submissive. That means they recognized his authority.

Werner Freund also documented his amazing life in some published books, an example of which is the The Wolfman which he wrote in 1988.

Due to his fame and remarkable achievement with these highly-feared but misunderstood predators, a lot of animal experts sought his advice on how to manage wolves in countries where they were making come backs.

His work earned him several awards including the Saarland Order of Merit.

“To earn their respect, one must become a wolf, and that is what I am to them – their leader,” Werner Freund to the Telegraph.

His Later Years and Death

Even during his later years, Werner still had an infinite love for his wolves did not feel like he could leave his work. Despite being 80 at the time of his death, Freund Werne still allowed his wolves to eat from his mouth.

He died on a Sunday after a brief illness.

Mayor of Merzig, Marcus Hoffeld, later said that the death of this man hit the people of Merzig very deeply.