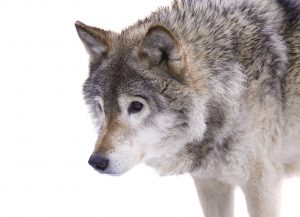 They are social creatures usually travelling in a nuclear family composed of an adult mated coupled and their offspring. The gray wolf maintains its position as the apex predator wherever it’s found. Its only contenders are humans and tigers.

It can hunt fearlessly and will attack large hoofed animals but will also feed on smaller animals, livestock, carcasses, and garbage.

Because of its attack on livestock, it has been hunted for centuries by people and is now extinct in many areas globally.

Wolves in the wild averagely live for between six to eight years, with the oldest age so far being 13 years. In captivity, they can live for up to 16 years.

The weight of individuals of this species varies with location. For instance, the larger wolves of Alaska and Canada can weigh up to 3 or 6 times more than gray wolves from the Middle East and South Asia.

7) The Gray Wolf And Humans

Gray wolf attacks are rare because once sighted, they are often subsequently hunted and killed. Of course as with all wild animals of any significant size, wolves can be dangerous.

The frequency of attacks on humans also varies with geographical location and historical period. The major source of friction between man and wolf remains the latter’s attack on livestock.

Wolves have fascinated people for centuries now. From mythology, to folklore, history, fables and modern literature, wolves, especially the gray wolf, continues to feature prominently in the human imagination. In literature, for example, the wolf is portrayed as deceitful and dangerous but also powerful.

In many cultures, the gray wolf remains a symbol of strength and fighting/hunting prowess.

On the other hand, it is also despised and hunted mostly in farming communities due to the inevitable attacks on livestock. For now, the wolf population has definitely reduced across most species. The few that exist show a general fear of humans and prefer to stay well away from them.

As always, exercise caution in the presence of wild animals. 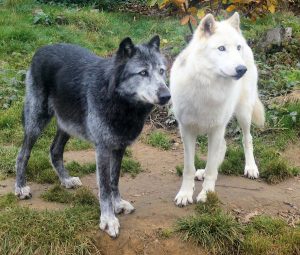 The gray wolf displays monogamous reproduction with one mate for life but it will pair with another if its mate dies. The males may also display homosexual behavior in rare instances.

This species can mate and reproduce from the age of 9 to 10 months (in captivity), to 2 years old (in the wild). Being mammals, they produce live young with a gestation period of 62 to 75 days.

Pups are mostly born in the summer months. Average litter size is about 5 to 6 pups though there are very rare records of up to 17 pups at a time.

9) Diet/Hunting Pattern Of The Gray Wolf

This is a slender and powerfully built animal with long legs that allow it to move swiftly even in deep snow. Its heavy, large teeth are perfect for crushing most bones and it clamps down with a bite force in the range of 10,340 kPa (1,500 psi). That’s about twice the bite force of a German shepherd.

It hunts in stages: tracking prey by scent, stalking quietly, chasing it, and the final attack. In the case of very large prey, the wolf will tear off large chunks of flesh to cause massive blood loss. For smaller prey, it will tear out their throat or simply immobilize them with its front paws and pin them down.

The breeding pair in the pack feeds on prey first and when they’re done, other family members can eat.

The gray wolf was the most widely distributed mammal in its natural habitats globally but deliberate and continuous human slaughter of this species has reduced its population to about a third of what it used to be.

This attack was relentless and was aimed at protecting human lives and livestock.

Consequently, the attacks were so successful that this species is now extinct in a large part of Mexico, Western Europe, and the United States.

Today, you may spot scattered populations of the gray wolf in remote wilderness areas of Canada, Alaska, northern USA, Europe, and parts of Asia. There were comprehensive recovery and conservation efforts in the 1970s, and as a result, there’s a slight recovery of their numbers.

In addition, gradual rural human population migration to urban areas and polices like legal protection and land-use changes have had positive effects on their numbers.

For now, the gray wolf is listed as Least Concern by the IUCN.

Wolves in general have evolved over a timescale of about 800,000 years. The modern dog, gray wolf, and dingo are closely related.

The major differences in the evolution of each group relies heavily on conditions like habitat, climate, type of prey, etc. Experts believe that many wolf populations went extinct at the same time with the Last Glacial Maximum (24,000 to 18,000 calendar years ago).

In the genus Canis, the gray wolf has the position of the second most specialized member after the Ethiopian wolf. This is because of its attributes like its adaptations for hunting large prey, a highly advanced expressive behavior, and its social behavior.

Nevertheless, it’s still closely related to smaller species like the coyote and the golden jackal and it breeds successfully with them.

Gray wolves will thrive in a diversity of habitat as long as they have access to prey. They can live in woodlands, mountains, deserts, grasslands, tundra, forests, etc.

Today, gray wolves exist in some number in places like Alaska, in the Yellowstone National Park (Wyoming, USA), in parts of Canada, and Asia. In Europe, you can find them in Italy, Greece, Croatia, Russia, Finland, etc.