By now, residents of Eastern Canada and the USA are accustomed to a smart, fast, and very adaptable “coyote-like” animal living around them. This creature lurks around in the wild in forests, in parks, and sometimes even right in busy cities.

In 2013, Javier Monzón a canine geneticist decided to investigate reports of a group of coyotes living in northeastern North America. However, further observation revealed that these “coyotes” were bigger, stronger, and faster than the usual coyotes.

It turns out these animals aren’t true coyotes at all. Actually, they would be better classified as coyote-wolf hybrids or just the coywolf. And, they’ve been around for at least a century now.

Hiding In Plain Sight: What Are Coyote-Wolf Hybrids?

The Coyote-wolf hybrid is a very unique creature. Not only is it a mix of two DNA, wolf and coyote, it also has some dog in its ancestry. The wolf genes are responsible for the large size of these creatures.

So, technically this is a part-coyote, part-wolf, with some dog hybrid that are now so many in number, they may be taking over North America. In fact, these animals now number in the millions and have spread over a large part of eastern North America. And that number is growing.

This hybrid has for long been hiding in plain sight as the “Eastern coyote.” 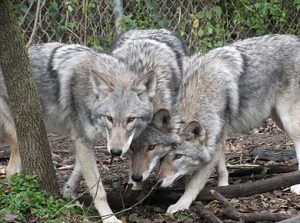 Now, how did these hybrids even come about in the first place?

Well it turns out hybrids are really not that peculiar and many exist already in the Canidae (canine) family such as the Wolf-Dog Hybrids. Also, even the red wolf was recently discovered to have more coyote DNA than wolf.

Apparently, as deforestation by humans, hunting, lack of prey, poisoning decimated wolf populations in the eastern part of the continent, they began to interbreed with western coyotes.

From when the first hybrid was reported in 1919 in Ontario, Canada to date, they have now spread as far as Virginia, USA.

Just like the wolf-dog and most other hybrids, the coyote-wolf exhibits the features of both wolf and coyote:

How Did Coyote-Wolf Hybrids Become So Abundant?

As mentioned before, these hybrids now number in the millions across eastern North America and are still increasing in population.

Researchers are pointing to a number of factors that are allowing these creatures to survive despite trying conditions:

Impact Of Coyote-Wolf Hybrids On Conservation.

When genetic lines are crossed in this way, issues begin to crop up. For instance, it could eventually lead to dilution of the pure species. But more worrisome is the fact that species that would normally qualify for protection by law may lose that status when they are interbred.

Meaning, as hybrids, they may not be covered by protection under U.S. law leaving them open to hunting, etc.

This would definitely be a problem for the wolves. For example, the eastern wolf is protected in Canada however as hybrids, they likely do not qualify for protection under U.S. law. Protection there covers the so-called “pure breeds.”

Conservationists are now calling for review of many of these “outdated” endangered species polices in the USA where most of these hybrids live.

Whatever the case, these hybrids appear to be enjoying the best of two, or even three, worlds and that may allow them survive where their pure bred parents cannot.